I read the first book in this spooky Canadian middle grade series for my research project, and I really enjoyed it! It’s a little on the younger side for middle grade books, but it is such a fun Hallowe’en read, and has the bonus of being written by a Canadian. The whole series is getting released in a box set at the end of the month.

“Cat Peters just transferred to Darkmont High and is already desperate to get out. When she hears that Grimoire, the private school nearby, is offering scholarships to the winners of a Halloween soccer match, Cat jumps at the chance. Her little sister, Sookie, and their bookworm neighbor, Jasper, try to tell her there’s something … “just not right” about the old school on the hill, and their worries are confirmed when they uncover a mystery about an entire soccer team that disappeared many years ago. Further investigation leads Cat to a book about ancient Celtic myth and fairy lore, and she soon realizes that there is something truly wicked at work inside the walls of Grimoire.”

This comic has been on my radar for quite a while. I got drawn into this book by the fabulously enticing cover. I am really excited about it because it seems to be a sci-fi light adventure story with a strong female central character. I may actually purchase this one! My personal comic collection is sorely lacking.

“Monstress is about an outsider, a young woman who belongs nowhere; it is about young women who fight, who tame, who are consumed—and who become monsters in their own right,” said Liu. “I wanted to tell a story that encompasses all these things, and more. A story about women, young and old, picking up the pieces after surviving the horrors of war—and finding a home for themselves in a world that has otherwise exploited them. Set in an alternate history to our own, where immense Cloverfield-like monstrosities have conquered half the planet, and spanning the steppes of a shattered Asia, to the destroyed heart of a fallen Europe, Monstress is an epic adventure of frontiers and empires, and the rise of a young woman warrior, whose power may either doom or redeem the planet.”

Another Hallowe’en read by a Canadian, this next comic is the second volume in the new Edward Scissorhands series. I liked the first one, but it didn’t blow me away. That being said, I LOVE Edward Scissorhands, so I am definitely going to read this.

“After settling in with Megs and her family, Edward becomes curious about a television “miracle doctor” named April Wells, and enlists the help of friends and townspeople to send her a homemade audition tape. While Megs struggles with her uncertainty about the whole situation, Edward has a quiet hope that, maybe, she could help him.”

I want this in my hands now! This next book is a young adult, historical horror story about a teenager who can’t seem to die.

The Death and Life of Zebulon Finch, Volume One: At the Edge of Empire by Daniel Kraus, Publication Date: October 27, 2015

“May 7, 1896. Dusk. A swaggering seventeen-year-old gangster named Zebulon Finch is gunned down on the shores of Lake Michigan. But after mere minutes in the void, he is mysteriously resurrected.
His second life will be nothing like his first.

Zebulon’s new existence begins as a sideshow attraction in a traveling medicine show. From there, he will be poked and prodded by a scientist obsessed with mastering the secrets of death. He will fight in the trenches of World War I. He will run from his nightmares—and from poverty—in Depression-era New York City. And he will become the companion of the most beautiful woman in Hollywood.
Love, hate, hope, and horror—Zebulon finds them. But will he ever find redemption?

Ambitious and heartbreaking, The Death & Life of Zebulon Finch, Volume 1: At the Edge of Empire is the epic saga of what it means to be human in a world so often lacking in humanity.”

This next YA Horror sounds creepy and mysterious. I love the last description: “A book about two twelve-year-olds that is definitely not for kids.”

“A blackly comic tale about two children you would never want to meet.

Set in the Cornish town of Fowey, all is not as idyllic as the beautiful seaside town might seem. The body of a young woman is discovered in the nets of a fishing boat. It is established that the woman was murdered. Most are shocked and horrified. But there is somebody who is not – a twelve-year-old girl. She is delighted; she loves murders. Soon she is questioning the inhabitants of the town in her own personal investigation. But it is a bit boring on her own. Then Miles Giffard, a similarly odd twelve-year-old boy, arrives in Fowey with his mother, and they start investigating together. Oh, and also playing games that re-enact the murders. Just for fun, you understand…

A book about two twelve-year-olds that is definitely not for kids.”

This next middle grade book sounds like a creepy middle grade historical horror. I am really interested that it is a magical realism story taking place in 1930s Alabama. 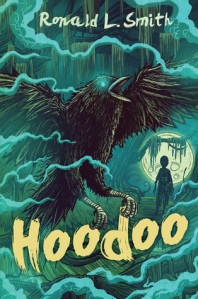 ition of practicing folk magic: hoodoo, as most people call it. But even though his name is Hoodoo, he can’t seem to cast a simple spell. Then a mysterious man called the Stranger comes to town, and Hoodoo starts dreaming of the dead rising from their graves. Even worse, he soon learns the Stranger is looking for a boy. Not just any boy. A boy named Hoodoo. The entire town is at risk from the Stranger’s black magic, and only Hoodoo can defeat him. He’ll just need to learn how to conjure first. Set amid the swamps, red soil, and sweltering heat of small town Alabama in the 1930s, Hoodoo is infused with a big dose of creepiness leavened with gentle humor. 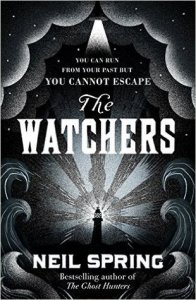 “1977
The Havens, Wales
My Name is Robert Wilding.

Since childhood I have been running from my parents’ deaths. From my grandfather Randall Llewellyn Pritchard – his fanatical omens about fires in the sky. From what happened at Broad Haven.

But now my memories have returned to haunt me.

In the ministry of Defence Room 800 I met the man who keeps the nation’s secrets – who wants me to investigate the sightings at Broad Haven: the ghostly figures, the lights from another world.

In know its is my duty to expose the truth behind ‘the happenings’, even if it will be dangerous. Even though I may not live to tell the tale.

I know it is my duty, but still I am afraid. I know the Watchers will be waiting for me there”

And finally, a middle grade horror oldie. This book was originally published in 1972, and it got a new cover and reprint in 1986 and 2009. I found this on my search for books about witches when I was looking for Hallowe’en reads. It won the Newbery Honor award in 1973, but I’m just really intrigued that it is a middle grade about cats and witches. 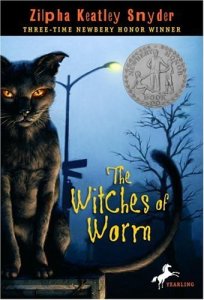 “Cats. Jessica’s never liked them. Especially not a skinny, ugly kitten that looks like a worm. Worm. Jessica wishes she’d never brought Worm home with her, because now he’s making her do terrible things. She’s sure she isn’t imagining the evil voice coming from the cat, telling her to play mean tricks on people. But how can she explain what’s happening?

Witches. Jessica has read enough books to know that Worm must be a witch’s cat. He’s cast a spell on her, but whom can she turn to? After all, no one will believe that Worm has bewitched her…or worse! “