Catherynne M. Valente has been on my radar for a while. I tried to read The Girl Who Circumnavigated Fairyland in a Ship of Her Own Making, but I couldn’t get into at the time. You have to love the description for this book: “a decopunk pulp SF alt-history space opera mystery.”

Radiance is a decopunk pulp SF alt-history space opera mystery set in a Hollywood—and solar system—very different from our own, from the phenomenal talent behind the New York Times bestselling The Girl Who Circumnavigated Fairyland in a Ship of Her Own Making.

Severin Unck’s father is a famous director of Gothic romances in an alternate 1986 in which talking movies are still a daring innovation due to the patent-hoarding Edison family. Rebelling against her father’s films of passion, intrigue, and spirits from beyond, Severin starts making documentaries, traveling through space and investigating the levitator cults of Neptune and the lawless saloons of Mars. For this is not our solar system, but one drawn from classic science fiction in which all the planets are inhabited and we travel through space on beautiful rockets. Severin is a realist in a fantastic universe.

But her latest film, which investigates the disappearance of a diving colony on a watery Venus populated by island-sized alien creatures, will be her last. Though her crew limps home to earth and her story is preserved by the colony’s last survivor, Severin will never return.

This next book is the first in a new trilogy about Fae, and my god, does it sound interesting! I love the boarding school setting, and I could see this book either being really good or cheesy. I am hoping the gorgeous cover points to really good!

“For Noa and Callum, being together is dangerous, even deadly. From the start, sixteen-year-old Noa senses that the mysterious transfer student to her Monterey boarding school is different. Callum unnerves and intrigues her, and even as she struggles through family tragedy, she’s irresistibly drawn to him. Soon they are bound by his deepest secret: Callum is Fae, banished from another world after a loss hauntingly similar to her own.

But in Noa’s world, Callum needs a special human energy, Light, to survive; his body steals it through touch—or a kiss. And Callum’s not the only Fae on the hunt. When Callum is taken, Noa must decide: Will she sacrifice everything to save him? Even if it means learning their love may not be what she thought?”

This next historical YA sounds like it will be an exciting story. A smart 17-year-old going undercover in Germany as a governess during WWII? This could be an awesome combination! 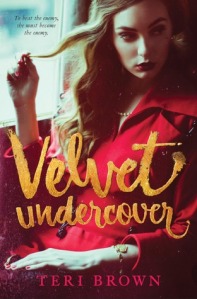 “Samantha Donaldson’s family has always done its duty for the British Crown. In the midst of World War I, seventeen-year-old Sam follows in their footsteps, serving her country from the homefront as a Girl Guide and messenger for the intelligence organization MI5. After her father disappears on a diplomatic mission, she continues their studies of languages, high-level mathematics, and complex puzzles and codes, hoping to make him proud.

When Sam is asked to join the famed women’s spy group La Dame Blanche she’s torn—this could be the adventure she’s dreamed of, but how can she abandon her mother, who has already lost a husband to the war? But when her handlers reveal shocking news, Sam realizes there’s no way she can refuse the exciting and dangerous opportunity.

Her acceptance leads her straight into the heart of enemy territory on a mission to extract the most valuable British spy embedded in Germany, known to the members of LDB only as Velvet. Deep undercover within the court of Kaiser Wilhelm II, Samantha must navigate the labyrinthine palace and its many glamorous—and secretive—residents to complete her assignment. To make matters worse she finds herself forming a forbidden attraction to the enemy-a dangerously handsome German guard. In a place where personal politics are treacherously entangled in wartime policy, can Samantha discover the truth and find Velvet before it’s too late…for them both?

From author Teri Brown comes the thrilling story of one girl’s journey into a deadly world of spycraft and betrayal—with unforgettable consequences.”

The first in a new series, the second novel already has a title and is set to come out next year. I love the gorgeous cover, and it looks like it will be a fun adventure middle grade story. I also appreciate having a female MC for this type of story.

“I am a gold lock.
I am a gold key.
However high and low you hunt,
You’ll never find me.

Wren Matthews outgrew nursery rhymes a long time ago. Little did she know that songs of twinkling little stars and four-and-twenty blackbirds are the key to the ancient magic of stardust – a magic that only a few people can see and use. And Wren is one of them.

Wren has always preferred to stick to herself. But when she is invited to the faraway fortress where an ancient order has long studied and guarded the stardust, she doesn’t hesitate to accept.

Soon Wren is swept up in strange dreams, buried secrets, and rumors that an old enemy is plotting his return. As she tries to master her new abilities, Wren only knows one thing for sure. there’s magic in the world – and it’s waiting for her.”

I have always been fascinated with Natasha Romanoff, but I haven’t found a truly good story or comic about her or Black Widow. I am really excited to a story just about Black Widow, and to see what happens when she goes back to Russia. 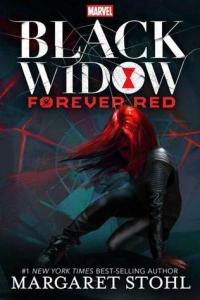 “Enter the world of the Avengers’ iconic master spy

Natasha Romanoff is one of the world’s most lethal assassins. Trained from a young age in the arts of death and deception, Natasha was given the title of Black Widow by Ivan Somodorov, her brutal teacher at the Red Room, Moscow’s infamous academy for operatives.

Ava Orlova is just trying to fit in as an average Brooklyn teenager, but her life has been anything but average.The daughter of a missing Russian quantum physicist, Ava was once subjected to a series of ruthless military experiments-until she was rescued by Black Widow and placed under S.H.I.E.L.D. protection. Ava has always longed to reconnect with her mysterious savior, but Black Widow isn’t really the big sister type.

When children all over Eastern Europe begin to go missing, and rumors of smuggled Red Room tech light up the dark net, Natasha suspects her old teacher has returned-and that Ava Orlova might be the only one who can stop him. To defeat the madman who threatens their future, Natasha and Ava must unravel their pasts. Only then will they discover the truth about the dark-eyed boy with an hourglass tattoo who haunts Ava’s dreams. . . .

Black Widow: Forever Red features all the heart-pounding adventure readers expect from Marvel, written by #1 New York Times best-selling author Margaret Stohl. Uncover a new side of the Marvel Universe that will thrill loyal fans and newcomers alike, as Stohl reveals the untold story of Black Widow for the very first time.”

This middle grade mystery series featuring four girls looks like so much fun! The first book came out in March, and the second book, The Mystery of the Zorse’s Mask, was released in September. I love that the series centres around a group of girls who form a secret club, and I think the theme of saving animals will really resonate with children as well as older readers.

“No one at school knows that Kelsey, Becca, and Leo are secretly friends. They have nothing in common–until they rescue three kittens and form a club to help animals through volunteering, spying, and solving mysteries. In the first book of this series, Kelsey helps catch a runaway zorse (horse + zebra) with the help of another girl from school named Becca. The two are walking home when they happen upon a litter of kittens trapped in a dumpster and Leo Polanski is the only person around who can help get them out. The three unlikely friends decide to work together to help solve animal crimes with their secret club!”

I came across this book by Canadian author Caroline Pignat, because it is up for the 2015 Governor General’s award. The winners will be announced on October 28, and more information about the award can be found here. It sounds like a fascinating historical YA, and I love stories that take place in Canada. 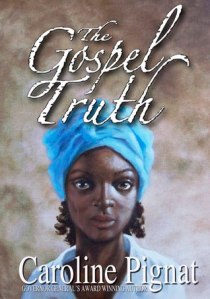 “Award-winning author Caroline Pignat’s new historical novel recreates the world of a Virginia tobacco plantation in 1858. Through the different points of view of slaves, their masters and a visiting bird-watcher the world of the plantation comes to live in this verse novel.

Phoebe belongs to Master Duncan and works in the plantation kitchen. She sees how the other slaves are treated the beatings and whippings, the disappearances. She hasn’t seen her mother since Master Duncan sold her ten years ago. But Pheobe is trying to learn words and how to read and when she is asked to show the master’s Canadian visitor, Doctor Bergman, where he can find warblers and chickadees she starts to see things differently. And Doctor Bergman has more in mind that just drawing the local birds.

Pheobe’s friend Shad works on the plantation as well but mostly he worries about his brother Will. His brother is the last member of his family and he is determined to escape from the master and the tobacco plantation. He has already been caught and beaten more than once. And the stories about life in Canada can’t be true, can they? How does a man survive without the master there taking care of everything?”