I absolutely devoured the first book in this series, The Young Elites. I liked the venetian setting, the idea of superheroes living in a time resembling the renaissance, and the way prejudice is explored through hair colour.  But the thing that really stood out to me was the main character, Adelina. She is tough, damaged, talented, and can be downright cruel and mean. I’m really excited to see how things proceed in the second book! 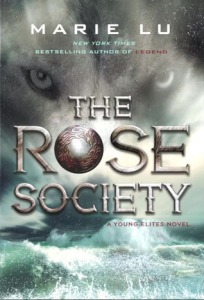 “Once upon a time, a girl had a father, a prince, a society of friends. Then they betrayed her, and she destroyed them all.

Adelina Amouteru’s heart has suffered at the hands of both family and friends, turning her down the bitter path of revenge. Now known and feared as the White Wolf, she and her sister flee Kenettra to find other Young Elites in the hopes of building her own army of allies. Her goal: to strike down the Inquisition Axis, the white-cloaked soldiers that murdered her love, the Crown Prince Enzo Valenciano.

But Adelina is no heroine. Her powers, fed only by fear and hate, have started to grow beyond her control. She does not trust her newfound Elite friends. Teren Santoro, leader of the Inquisition, wants her dead. And her former friends, Raffaele and the Dagger Society, want to stop her thirst for vengeance. Adelina struggles to cling to the good within her. But how can someone be good, when her very existence depends on darkness?”

This next book drew me in because of the fabulous cover, and then I saw that it is a book about Wendy Darling from Peter Pan. It sounds like such an interesting take on the original story: What if Peter actually plucked Wendy from a perfectly fine life, and then tricked and manipulated her into forgetting about it. 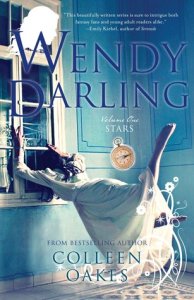 “Wendy Darling has a perfectly agreeable life with her parents and brothers in wealthy London, as well as a budding romance with Booth, the neighborhood bookseller’s son. But while their parents are at a ball, the charmingly beautiful Peter Pan comes to the Darling children’s nursery and—dazzled by this flying boy with god-like powers—they follow him out of the window and straight on to morning, to Neverland, an intoxicating island of feral freedom.

As time passes in Neverland, Wendy realizes that this Lost Boy’s paradise of turquoise seas, mermaids, and pirates holds terrible secrets rooted in blood and greed. As Peter’s grasp on her heart tightens, she struggles to remember where she came from—and begins to suspect that this island of dreams, and the boy who desires her—have the potential to transform into an everlasting nightmare.”

I had heard about Susin Nielsen, but I recently re-discovered her when looking at Governor General nominees in Canada. This next book is up for a Governor General Award this year, and it sounds like it could be a really sweet and interesting look at two young teens with opposite lives and personalities. I also appreciate that the protagonists are at that very interesting age of 12-14 years old.

We Are All Made of Molecules by Susin Nielsen, Publication Date: May 12, 2015

“Award-winning author Susin Nielsen has created two narrators who will steal your heart and make you laugh out loud.

Fourteen-year-old Ashley is the undisputed “It” girl in her class, but her grades stink.

Their worlds are about to collide when Stewart and his dad move in with Ashley and her mom. Stewart is trying to be 89.9 percent happy about it, but Ashley is 110 percent horrified. She already has to hide the real reason her dad moved out; “Spewart” could further threaten her position at the top of the social ladder.

They are complete opposites. And yet, they have one thing in common: they—like everyone else—are made of molecules.

I really like Kelley Armstrong, particularly because she is a Canadian author from Ontario. This next book is a short story she has coming out just in time for Hallowe’en! 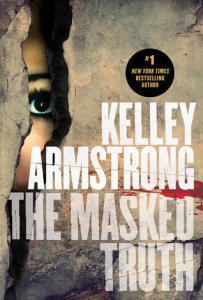 “Riley Vasquez is haunted by the brutal murder of the couple she was babysitting for.

Max Cross is suffering under the shadow of a life-altering diagnosis he doesn’t dare reveal.

The last thing either of them wants is to spend a weekend away at a therapy camp alongside five other teens with “issues.” But that’s exactly where they are when three masked men burst in to take the group hostage.

The building has no windows. The exits are sealed shut. Their phones are gone. And their captors are on a killing spree.

Riley and Max know that if they can’t get out, they’ll be next—but they’re about to discover that even escape doesn’t equal freedom.”

How could I not include this beautiful, fully-illustrated copy of Harry Potter and the Philosopher’s Stone? I’m basically a sucker for anything Harry Potter. I have both Film Wizardry and Page to Screen, so you know I will be getting this one too! It will be an interesting way to re-experience the first Harry Potter book.

“The landmark publishing event of 2015 – a full-colour illustrated edition of J.K. Rowling’s Harry Potter and the Philosopher’s Stone with breathtaking illustration by Jim Kay, winner of the Kate Greenaway medal”

As I’ve shown above, I am pretty obsessed with Canadian authors at the moment, especially middle grade books. The Nest sounds like it will be an eerie read for October. I like to set myself a reading list of creepy books to get into the Hallowe’en spirit.

Steve just wants to save his baby brother—but what will he lose in the bargain? 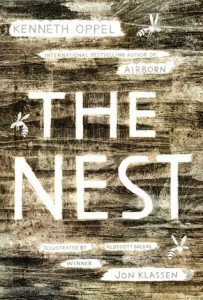 This is a haunting gothic tale for fans of Coraline, from acclaimed author Kenneth Oppel (Silverwing, The Boundless) with illustrations from Caldecott Medalist Jon Klassen.

For some kids summer is a sun-soaked season of fun. But for Steve, it’
s just another season of worries. Worries about his sick newborn baby brother who is fighting to survive, worries about his parents who are struggling to cope, even worries about the wasp’s nest looming ominously from the eaves. So when a mysterious wasp queen invades his dreams, offering to “fix” the baby, Steve thinks his prayers have been answered. All he has to do is say “Yes.” But “yes” is a powerful word. It is also a dangerous one. And once it is uttered, can it be taken back?

Celebrated author Kenneth Oppel creates an eerie masterpiece in this compelling story that explores disability and diversity, fears and dreams, and what ultimately makes a family. Includes illustrations from celebrated artist Jon Klassen.

This next book is also a Governor General nominee, and got good reviews on Goodreads. I have never heard of the author, but it sounds like it could be an interesting read about bullying.

A picture is worth a thousand words–and with a unique photographic format, a stunning original voice, and a provocative portrayal of bullying, Young Man with a Camera is a book to get people talking.

T– is used to getting grief. He gets it from his mom, who blames herself for his accident years earlier. He gets it from Mr. Lam, who suspects every kid of stealing from his shop. Worst of all, he gets it from Joined at the Hip, a trio of bullies so vicious that they leave T– terrified of even using his entire name.

But T– has his own strength too: his camera, which captures the unique way he sees the world. His pictures connect him to Ms. Karamath, the kind librarian at school; his friend Sean, whose passion for mysteries is matched only by his love for his dog; and especially Lucy, a homeless woman who shares his admiration for the photographer Diane Arbus. When Lucy is attacked by Joined at the Hip, T– documents the assault on film. But the bullies know he has the photographs, and their anger could be deadly. What’s the right thing for T– to do? Do pictures ever tell the whole truth? And what if the truth isn’t always the right answer?

Finally, I recently discovered the Secrets series by Orca Publishing in Canada. All of the authors are Canadian, and all of the books are YA and deal with a secret of some sort. Kelley Armstrong’s book and Eric Walters’ books were the two that grabbed me the most. The other authors are Norah McClintock, Vicki Grant, Marthe Jocelyn, Kathy Kacer, and Teresa Toten. I think this is a great way to introduce Canadian authors, and I really like that the stories take place in Canada – It is a refreshing change! I would love to see more sets like this, almost like a “sampler” of Canadian authors.

The Unquiet Past by Kelley Armstrong and Innocent by Eric Walters; Both Released: September 29, 2015 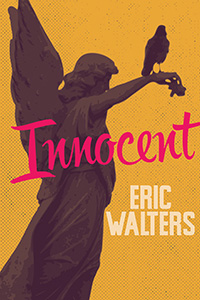 Sometimes you have to look back in order to move forward.

After the orphanage she lives in is destroyed by fire, Betty, an innocent and trusting teen, takes a job as a maid in Kingston, Ontario. Welcomed into the household of the wealthy Remington clan, Betty makes friends with the staff at the house and soon discovers that her mother had also been a maid there—and that her father is in a nearby jail, convicted of murdering her mother. When she meets her father, she is taken aback by his claims of innocence, and she decides to try to uncover the truth about her mother’s murder and her father’s conviction. A friendly young policeman assists her in her investigation (and shows an interest in Betty that is more romantic than professional). But all is not well in the Remington household, and someone doesn’t want Betty to learn the truth.

Tess has always been tormented by wa

king visions that make her question her sanity. When the orphanage she lives in burns down, she decides to face her fears and find out once and for all what is wrong with her. She believes the truth must lie with her parents, and so, armed with only an address and phone number, Tess travels to a crumbling mansion in rural Quebec, where she discovers evidence of mistreatment of mental patients. She also makes an unlikely ally and gradually unearths her family’s sad history—and finally accepts the truth about her paranormal powers.