There are so many new books coming out in September! A new Mercedes Lackey book about DRAGONS, the second Magisterium book, the fourth Throne of Glass book, and some wonderfully diverse books, but I am most excited about the Veronica Speedwell Mystery series.

Hunter, the first book in a new series by Mercedes Lackey, attracted my attention because of the amazing cover. I have not read any Mercedes Lackey books before, and I don’t feel like embarking on such an intimidating series as her Valdemar series. I have been looking for new dragon books since I enjoyed Seraphina, Talon, and Rogue.

“They came after the Diseray. Some were terrors ripped from our collective imaginations, remnants of every mythology across the world. And some were like nothing anyone had ever dreamed up, even in their worst nightmares.

Long ago, the barriers between our world and the Otherworld were ripped open, and it’s taken centuries to bring back civilization in the wake of the catastrophe. Now, the luckiest Cits live in enclosed communities,behind walls that keep them safe from the hideous creatures fighting to break through. Others are not so lucky.

To Joyeaux Charmand, who has been a Hunter in her tight-knit mountain community since she was a child, every Cit without magic deserves her protection from dangerous Othersiders. Then she is called to Apex City, where the best Hunters are kept to protect the most important people.

Joy soon realizes that the city’s powerful leaders care more about luring Cits into a false sense of security than protecting them. More and more monsters are getting through the barriers,and the close calls are becoming too frequent to ignore. Yet the Cits have no sense of how much danger they’re in-to them, Joy and her corp of fellow Hunters are just action stars they watch on TV.

When an act of sabotage against Joy takes an unbearable toll, Joy uncovers a terrifying conspiracy in the city. There is something much worse than the usual monsters infiltrating Apex. And it may be too late to stop them.”

I liked Callum’s adventures in the first Magisterium book, so I am really looking forward to book two coming out next month. I love the fun, colourful covers for this series. 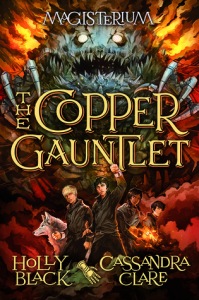 “Callum Hunt’s summer break isn’t like other kids’. His closest companion is a Chaos-ridden wolf, Havoc. His father suspects him of being secretly evil. And, of course, most kids aren’t heading back to the magical world of the Magisterium in the fall.

It’s not easy for Call . . . and it gets even harder after he checks out his basement and discovers that his dad might be trying to destroy both him and Havoc.

Call escapes to the Magisterium — but things only intensify there. The Alkahest — a copper gauntlet capable of separating certain magicians from their magic — has been stolen. And in their search to discover the culprit, Call and his friends Aaron and Tamara awaken the attention of some very dangerous foes — and get closer to an even more dangerous truth.

As the mysteries of the Magisterium deepen and widen, bestselling authors Holly Black and Cassandra Clare take readers on an extraordinary journey through one boy’s conflict — and a whole world’s fate.”

This next book looks like a fun, diverse middle grade urban fantasy. I found this book on a list of new diverse books. I could see me reading this after the Copper Gauntlet, when I inevitably want to find something similar. Bonus: it takes place in Rome! 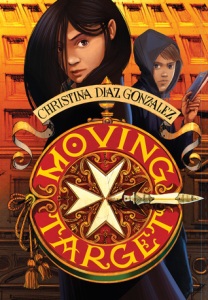 “Cassie Arroyo, an American studying in Rome, has her world ripped apart when someone tries to kill her father, an art history professor at an Italian university. Is she their next target?

Cassie sets out to uncover what is happening, only to learn that she is a member of an ancient bloodline that enables her to use the Spear of Destiny–a legendary object that can alter the future. Now running from a secret organization intent on killing those from her bloodline, Cassie must–with the help of some friends–decipher the clues that will lead her to the Spear.

This is a fast-paced thrill-ride of a book, rich with riddles and myth, that young readers will not want to put down.”

I have to be in the right mood to read the Throne of Glass series. I loved the prequel book, the Assassin’s Blade, I was lukewarm on the first book, Throne of Glass, and I loved the second book, Crown of Midnight. I haven’t read the book three, Heir of Fire, but I’m interested to continue this series. There are six books planned in total, and Sarah J. Maas’ new trilogy, A Court of Thorns and Roses, looks good, too.

“Everyone Celaena Sardothien loves has been taken from her. But she’s at last returned to the empire—for vengeance, to rescue her once-glorious kingdom, and to confront the shadows of her past . . .

Celaena’s epic journey has captured the hearts and imaginations of millions across the globe. This fourth volume will hold readers rapt as Celaena’s story builds to a passionate, agonizing crescendo that might just shatter her world.”

The next book is my most anticipated read for September! It is the first in a new Victorian mystery series, the Veronica Speedwell Mystery, by the same author that wrote the Lady Julia Grey mysteries.

“London, 1887. As the city prepares to celebrate Queen Victoria’s golden jubilee, Veronica Speedwell is marking a milestone of her own. After burying her spinster aunt, the orphaned Veronica is free to resume her world travels in pursuit of scientific inquiry—and the occasional romantic dalliance. As familiar with hunting butterflies as she is fending off admirers, Veronica wields her butterfly net and a sharpened hatpin with equal aplomb, and with her last connection to England now gone, she intends to embark upon the journey of a lifetime.

But fate has other plans, as Veronica discovers when she thwarts her own abduction with the help of an enigmatic German baron with ties to her mysterious past. Promising to reveal in time what he knows of the plot against her, the baron offers her temporary sanctuary in the care of his friend Stoker—a reclusive natural historian as intriguing as he is bad-tempered. But before the baron can deliver on his tantalizing vow to reveal the secrets he has concealed for decades, he is found murdered. Suddenly Veronica and Stoker are forced to go on the run from an elusive assailant, wary partners in search of the villainous truth.”

The next novel is a fantasy that seems to explore interesting feminist themes.

“The Royal Society of Unnatural Philosophers, one of the most respected organizations throughout all of England, has long been tasked with maintaining magic within His Majesty’s lands. But lately, the once proper institute has fallen into disgrace, naming an altogether unsuitable gentleman—a freed slave who doesn’t even have a familiar—as their Sorcerer Royal, and allowing England’s once profuse stores of magic to slowly bleed dry. At least they haven’t stooped so low as to allow women to practice what is obviously a man’s profession…

At his wit’s end, Zacharias Wythe, Sorcerer Royal of the Unnatural Philosophers and eminently proficient magician, ventures to the border of Fairyland to discover why England’s magical stocks are drying up. But when his adventure brings him in contact with a most unusual comrade, a woman with immense power and an unfathomable gift, he sets on a path which will alter the nature of sorcery in all of Britain—and the world at large…”

Finally, a new manga series has caught my attention. Although the first volume came out in Japan in 2014, The Ancient Magus’ Bride is new to North America. I picked up volume 1 last week, and volume 2 is out next week. I love when manga include fantasy elements, but are still grounded in the real world. This series contains a forced marriage plot, and although this plot is also seen in North American novels, I find it manifests differently in manga. 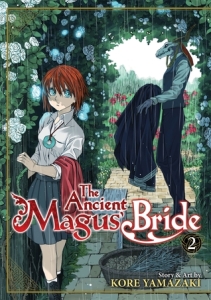 “A dark romance between a girl and a demonic sorcerer

Chise Hatori has lived a life full of neglect and abuse, devoid of anything resembling love. Far from the warmth of family, she has had her share of troubles and pitfalls. Just when all hope seems lost, a fateful encounter awaits her. When a man with the head of a beast, wielding strange powers, obtains her through a slave auction, Chise’s life will never be the same again.

The man is a “magus,”a sorcerer of great power, who decides to free Chise from the bonds of captivity. The magus then makes a bold statement: Chise will become his apprentice–and his bride!”